How to pronounce hamza in quran | Tajweed rules

In the Holy Quran, there are two types of hamza:

1. In this example, we pronounce the hamza al wasl:

2. In this example, we do not pronounce the hamza al wasl:

The hamza ء and its vowel marks after the definite article ال is prolonged of two beats only when the hamza ء is placed between the alif – ا and lam – ل.

Hamza al Wasl is pronounced when it is located at the beginning of the word with which we start or resume the recitation.

Thus, it is no longer pronounced if you do not make a pause on the word that precedes it.

It is pronounced with the short vowel mark fatha when it is started to be read while it is part of the definite article “ال“.

It is pronounced with the short vowel mark kasra when you start reading with the hamza al wasl when it is located at the beginning of a verb whose third letter is carrying by a fatha.

It is pronounced with the short vowel mark damma when it is started to be read when it is located at the beginning of an imperative verb whose third letter is surmounted by a compulsory damma.

The hamza al wasl is not pronounced when one does not pause on the word which precedes it because the letter surmounted by a sukoon that follows it can be pronounced by relying on the last one. letter of the previous word: it therefore no longer needs the hamza.

When we start with the hamza al wasl, it is pronounced with the short vowels fatha, kasra or damma.

If it is located inside an expression, it is never pronounced because in any case, it is not possible to resume reading with this hamza located in the middle of the expression.

But Allah is encompassing of the disbelievers. (2:19)

Has he looked into the unseen, or has he taken from the Most Merciful a promise? (79:18)

And who is more unjust than one who invents about Allah a lie or denies His verses? Indeed, the wrongdoers will not succeed. (6:21)

[Allah] said, “O Iblees, what prevented you from prostrating to that which I created with My hands? Were you arrogant [then], or were you [already] among the haughty?” (38:75)

It is all the same for them whether you ask forgiveness for them (63:6)

When hamza al wasl is preceded by a prolongation letter

The letter accompanying the prolongation letter is only pronounced with one beat.

When an indefinite word (which ends with tanween) followed by hamza al wasl which itself is followed by a letter carrying sukoon, the noon of the tanween will not be pronounced as noon with sukoon.

And the weighing [of deeds] that Day will be the truth (7:8)

Orally, hamza al wasl not being pronounced, noon sakeen of the tanween is therefore followed by a letter bearing sukoon.

As one cannot read two letters each carrying sukoon, it will be necessary to put in noon sakeen the vowel kasra. Moreover, when a word ending in tanween and which is followed by a definite word (starting with alif lam), in the Arabic language, there does not exist in the reading, two sukoon side by side (two sukoon cannot be followed). So it will be necessary to put the vowel mark kasra in the noon of tanween and make the connection with alif lam.

nd those who disbelieve say, “This [Qur’an] is not except a falsehood he invented, and another people assisted him in it.” (25:4)

The people of Lot denied the messengers (2:160)

This tajweed rules lesson is now finished. The next one will be insha’Allah about the rules of the assimilation of two letters. 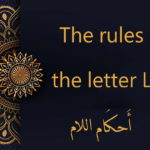 the rules of the letter Lam | Tajweed rules

The of the assimilation of two letters | Tajweed rules 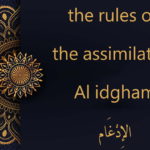 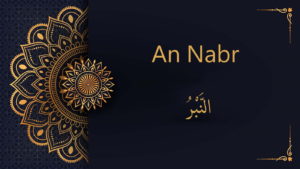 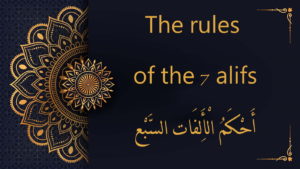 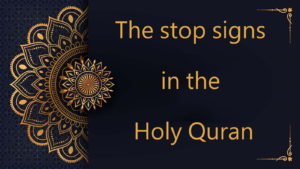